The collective display of knots  - designed to be wall suspended - is constructed on a piece of plywood covered in vermilion coloured cloth.  The panel measures 14" sq. & the knots themselves are made using 3/16" diameter rope in contrasting cadmium green - this to enhance the maritime theme (port/starboard) - & held in place using brass eyelets with screw threads. 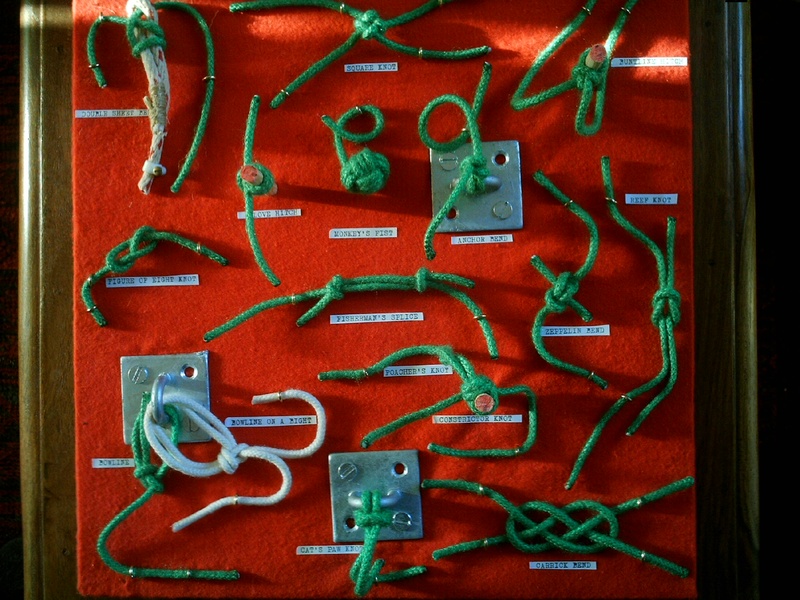 The Bowline Knot is the ultimate nautical knot; it was used extensively during the time of the tall ships to tie the bowline bridles to the cringles & allow a sail total freedom to follow the wind by maintaining slack in the bight.  The knot does not jam under heavy load.

The bowline was a rope used to steady the weather-edge of a sail forward when the ship was sailing close to the wind.

Bowline knots made on bights were applied where added strength was required.  A sisal rope worn weak, or of slightly inferior grade, would benefit from this variation in withstanding gusts more securely & gaining endurance against the abrasion to which it would be subjected by the brass cringles owing to movement in the sail.  The knot was also made for use as a temporary foothold in a rope.

The word bowline is derived from the Swedish 'bolina' - a line tied to a ship's bow - albeit the knot itself dates back to the time of the classical world.

The Reef Knot is used for tying reefs - portions of sails, folded or rolled up when the wind is violent to reduce the effective area.  The knot must never be used as a bend (to tie two seperate pieces of rope together).  Like the Bowline knot, the Reef knot too is of ancient provenance.

The Double Sheet Bend is used for tying together two separate pieces of rope, which may be of equal or dissimilar girth.  It is important that the bend is made in the proper way to ensure it stays secure.

The Clove Hitch is another popular, nautical knot of ancient provenance; its primary use is in belaying (to fasten a rope by winding around a strong pin on the side of a vessel or wharf).  It should be noted, that this particular hitch will at times slip, spill or, with multiple turns made, bind.

The Constrictor Knot: an extension of the Clove Hitch, this configuration lends itself well as a simple, effective, whipping knot.  It can also be used to temporarily tie shut a hessian bag & such like, but should be avoided as a mooring 'mechanism' since it has a tendency to bind under load.

The Zeppelin Bend: an overhand, interlocking technique producing excellent linkage between two ropes of equal girth.  Not of nautical provenance, the knot derives its name from past, frequent usage in anchoring rigid airships to docking ports.  An airship would subsequently be released for flight by untying the knots at each of the heavily loaded tethers.

The Anchor Hitch: a knot typically made to attach an anchor to a line.  It is also effective in attaching a rope to a line; a rope being idle cordage as opposed to a line which is tasked with a burden of work.

The Round Turn & Two Half Hitches: frequently employed as a mooring knot & generally favoured when tying-off a line to a fixed member or piling.  It is very similar in construction to the Anchor Hitch except the working end is not passed under the turn; as a result the knot does not jam making it somewhat easy to unravel.  It is a secure configuration, & with additional turns made it becomes a Pipe Hitch.

The Monkey's Fist Knot: a weight produced by weaving three interlocking circles of rope around an iron core to roughly the size of a cricket ball with a heaving line extending from it, the end of which attaches to a hawser.  A Monkey's Fist is thrown a short distance across from ship to shore & the hawser drawn to the dock, by means of the heaving line, where it is secured to a mooring bollard.

The Tugboat Hitch: typically employed for use in heavy towing or securing a line to a mooring pin.  The hitch is reliable, does not jam & easy to release even under load.  It is a simple knot to tie, & should be made on a bight to be taken over the pin to finish the fastening.